Title: The Heal Project – Half Moon Bay
Location: Half Moon Bay High School Auditorium
Link out: Click here
Description: The Half Moon Bay High School FFA together with The HEAL Project, U.S.A will sponsor the movie, Symphony of the Soil, on Saturday, Nov. 9th. The screening will take place in the HMBHS Auditorium (on Lewis Foster Drive) beginning at 7 PM. Advance tickets will be available on Saturday mornings from 9-1 at The Coastside Farmers’ Market in Half Moon Bay beginning tomorrow, 10/12. Cost: adults-$10, students-$5.
Start Time: 7:00PM
Date: 2013-11-09

Symphony of the Soil will screen at the Princeton Library as part of the Princeton Environmental Film Festival on Thursday February 7th, 2013.

Symphony of the Soil, Directed and produced by Deborah Koons Garcia, explores the complexity and mystery of soil. Filmed on four continents and sharing the voices of some of the world’s most esteemed soil scientists, farmers and activists, the film portrays soil as a protagonist of our planetary story. Using a mix of art and science, the film shows that soil is a complex living organism, the foundation of life on earth. The film also examines the use and misuse of soil in agriculture, deforestation and development, and the latest scientific research on its key role in addressing the most challenging environmental problems of our time.

The Princeton Environmental Film Festival is sponsored by the Princeton Public Library and is held annually in the winter at 65 Witherspoon Street in downtown Princeton, New Jersey.

Founded in 2006, the PEFF’s mission is to share exceptional documentary films and engage the community in exploring environmental sustainability from a wide range of angles and perspectives.

Most of the screenings are accompanied by a Q&A with film directors and producers, as well as other talks by invited speakers who visit for the festival or live in the local community. As the festival grows and consider its sustainability, it is mindful to expand its reach while keeping the character of the festival focused on being a great and special local event. So, for the PEFF, they think “small town, big ideas” is the best fit!

In 2012, the Princeton Environmental Film Festival, hit a milestone — year six — with an increase in attendance to our best ever — 4230 attendees. The films, filmmakers and other speakers and our first-year Next Generation Environmental Fair were outstanding and inspiring. The festival this year will be held in January and February 2013. See the Schedule for a complete listing of film times and dates. Please take a look at photos from the event and and keep up on news and festival updates on the PEFF Facebook page.

For past PEFF programming and films, please check out the Film Archive. 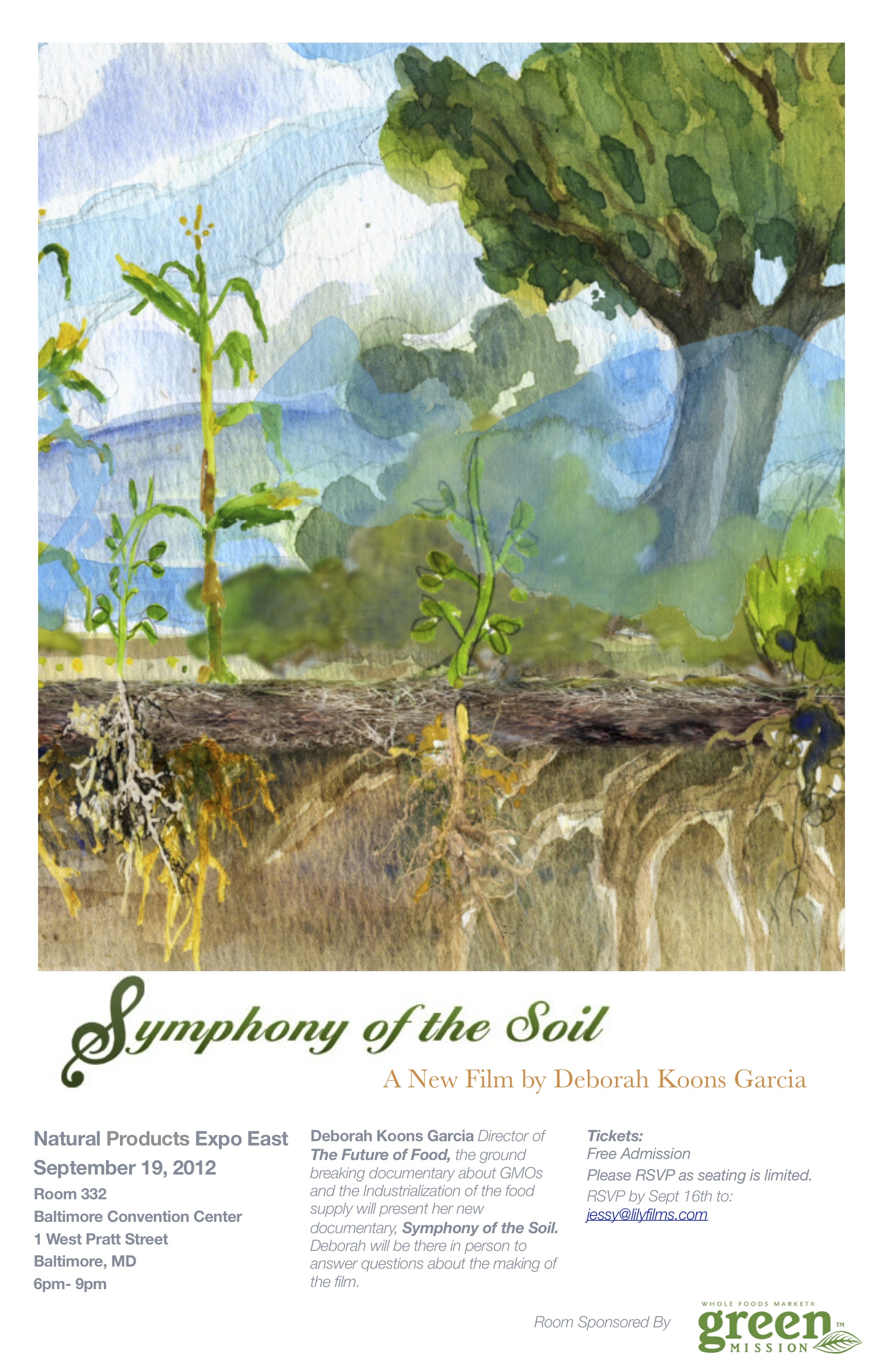 Symphony of the Soil will play at Natural Products Expo East

Deborah Koons Garcia Director of The Future of Food, the ground breaking documentary about GMOs and the Industrialization of the food supply will present her new documentary, Symphony of the Soil. Deborah will be there in person to answer questions about the making of the film.

April 14, 2012, 7pm
Symphony of the Soil will play at the Sonoma Film Festival on Saturday April 14th, at 7pm preceded by our Sonata of the Soil: Portrait of a Winemaker. The screening is open to the public, and general admission is $15.