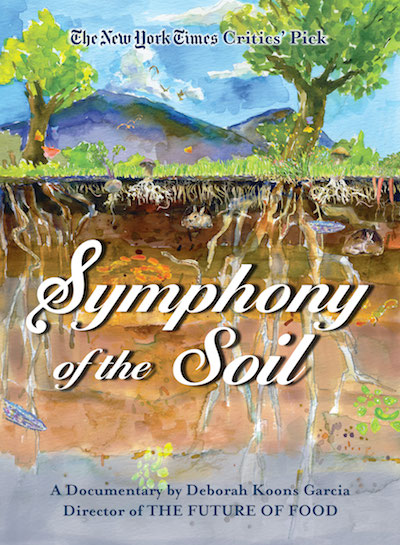 “Unfolding with gentle joy and an unexpected beauty, this ode to the miracle of the Earth’s topmost layer gives us a newfound respect for the ground beneath our feet.”
– New York Times *Critics Pick

“This film raises the bar. It makes you care about our Earth’s precious skin, so rare among planets.”
– Washington Post

“True to its title, the film really makes a symphony of soil…”
– Civil Eats, Sally Neas

BLURAY (only available in NTSC)

*Educational Collections comes with: Symphony of the Soil DVD with Educational Resources on DVD ROM, DVDs of Sonatas of the Soil Volume I and Volume II. (English NTSC)

MORE INFO ABOUT THE FILM

SYMPHONY OF THE SOIL SYNOPSIS
Drawing from ancient knowledge and cutting edge science, Symphony of the Soil is an artistic exploration of the miraculous substance soil. By understanding the elaborate relationships and mutuality between soil, water, the atmosphere, plants and animals, we come to appreciate the complex and dynamic nature of this precious resource. The film also examines our human relationship with soil, the use and misuse of soil in agriculture, deforestation and development, and the latest scientific research on soil’s key role in ameliorating the most challenging environmental issues of our time. Filmed on four continents, featuring esteemed scientists and working farmers and ranchers, Symphony of the Soil is an intriguing presentation that highlights possibilities of healthy soil creating healthy plants creating healthy humans living on a healthy planet.

Soil Association at the Curzon Theatre, London, United Kingdom – May, 2012
UK premiere in London, sponsored by the Soil Association with Deborah Koons Garcia in attendance.